NANOF is an independent production company based in Rome, Italy, founded by filmmakers Filippo Macelloni and Lorenzo Garzella. Its production is focused on global interest topics, social and current affairs, culture, sport and art issues, aimed to reach a wide audience with a creative and experimental approach. Since 2001, NANOF has produced documentaries, narrative films, crossmedia projects, installations, television programs, web series, corporate videos, developing an extensive network of collaborators internationally, working both in Italy and in co-production with foreign partners.

The name of the company is inspired by one of Oreste Fernando Nannetti’s pseudonyms, an extreme example of how creativity can overcome any wall, border or grammar, and how difficult it is to establish precise boundaries between madness, art and the desire to communicate.

Oreste Fernando Nannetti, also known as N.O.F.4 or NANOF (Rome, 31 December 1927 – Volterra, 24 November 1994), was an Italian painter and graffiti artist. During his imprisonment at the psychiatric hospital of Volterra (1958-1973), he was the author of a cycle of graffiti considered a masterpiece of the Art Brut, made by engraving the plaster with the buckle of his uniform from “crazy”.

Nannetti – in addition to producing visionary drawings on paper – wrote a large number of letters and postcards to relatives (mostly imaginary), signing with the initials “Nanof”, “Nof” or “Nof4” and defining himself “astronautical mining engineer”, “astral colonel”, “nuclear burglar” or “Nannettaicus Meccanicus – saint of the photoelectric cell”. In Volterra psychiatric hospital there are two cycles of graffiti by Nanof. One, 180 meters long and high on average two, run around the walls of the institute’s courtyard. The other, 102 meters long and 20 cm high, occupied the concrete handrail of a staircase. The two cycles were organized as a sort of story in pictures. Now they are slowly disappearing due to lack of care, despite some attempts at rescue and restoration.

Nanof Graffiti mix every-day elements with visionary science fiction stories often incoherent or difficult to interpret. They have been discovered, decrypted and transcribed in 1980 thanks to the sculptor Mino Trafeli.

Among the texts it is possible to read:

In his stories Nanof claims to be able to communicate telepathically with aliens who are “tall, spinach, Y-shaped nose”, and he tells the conquest of unknown worlds and terrible wars fought with highly technological weapons, intertwining in the narration alchemical spells and forests of metal pylons and antennas. 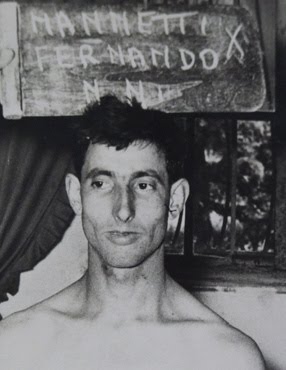